We developed a comprehensive, integrated, well-annotated database “CMP” consisting of various competitive math problems, including all previous problems on the AMC 8, 10, 12, AIME, MATHCOUNTS, Math Kangaroo Contest, Math Olympiads for Elementary and Middle Schools (MOEMS), ARML, HMMT, Math League, PUMaC, Stanford Math Tournament (SMT), Berkeley Math Tournament, the Carnegie Mellon Informatics and Mathematics Competition (CMIMC). The CPM is an invaluable “big data” system we use for our research and development, and is a golden resource for our students, who are the ultimate beneficiaries.

Based on artificial intelligence (AI), machine learning, and deep learning, we also devised a data mining and predictive analytics tool for math problem similarity searching. Using this powerful tool, we can align query math problems against those present in the target database “CPM,” and then detect those similar problems in the CMP database.

The AMC 8 is a 25-question, 40-minute, multiple choice examination in middle school mathematics designed to promote the development and enhancement of problem solving skills. The problems generally increase in difficulty as the exam progresses. Usually the last 5 problems are the hardest ones.

Among the final 5 problems on the 2017 AMC 8 contest, there is one algebra problem: Problem 21; there are 2 discrete math problems (which contains number theory and counting): Problems 23 and 24; and there are 2 geometry problems: Problems 22 and 25.

For those hardest problems on the 2017 AMC 8, based on the database searching, we found:

We can see that Problem 23 is the only problem that is new and original. Every other problem has strong similarities to previous problems.

Problem 23 is involved in detecting a sequence of four factors of 60 that forms an arithmetic progression with a common difference of 5.

Problem 24 is equivalent to finding the number of integers among the first 365 positive integers that are not divisible by 3, 4, or 5. We should use the principle of inclusion and exclusion (for 3 sets) to solve this problem. 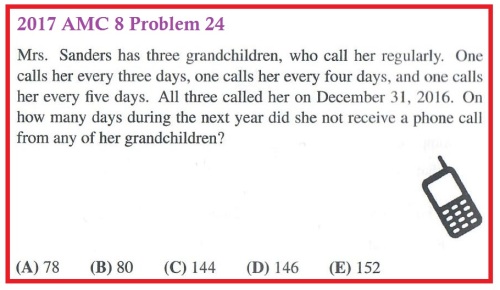 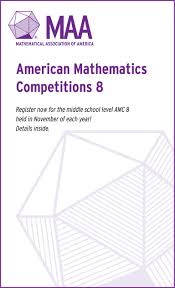